KETHI KILONZO HAS APPLIED TO THE HIGH COURT SEEKING ORDERS TO HAVE HER CRIMINAL CASE TERMINATED. 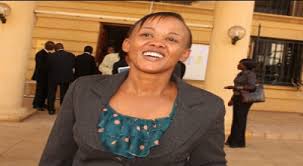 Diana Kethi Kilonzo has applied to the high court seeking orders to have her criminal case terminated due to failure by the prosecution to supply defense with witness statements and other documents which prosecution intends to rely on.
The prosecution has not complied with orders issued by the trial court on 3 September 2013 required the office of the director of public prosecution to supply Keth kilonzo’s defense lawyers with  documents and witness statement has ordered by acting chief magistrate Diana Mulekyo.
Kethi was charged of stealing a voter’s card she arraigned before Chief magistrate’s court facing the offense, her criminal case was scheduled to taken on 17 March 2014 the same could not proceedings because the prosecution has not complied with orders of the court.
She will be asking the court to dismiss the criminal indictment, saying that the hands of the defense are being tied unjustly by the prosecution.
She also sought several declarations in her application among them that the court  makes a finding that her constitutional rights has been violated as provided for under article 50(1) and 50 (2) of the constitution.