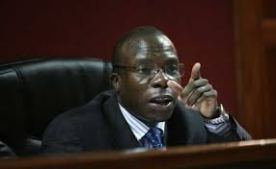 Chief Justice Dr Willy Mutunga has appointed a three-judge bench to hear an application by Olive Communication PVT.
Olive Communication PVT moved to court seeking judicial review of the decision to cancel the award of the laptop tender and its subsequent exclusion from a new bidding process.
The three judge bench will consist presiding judge, Justice Kanyi Kimondo, Justice Mumbi Ngugi and George Odunga.
.The high court issued order stopping the award of the multi billion lucrative tender for the supply of Laptops, pending the hearing of application filed by Olive Telecommunication PVT limited challenging the decision of the review board to annul the award.
Justice Weldon Korir on 19 of March halted the move by the Public Procurement, administrative review board, saying that the application has substantive issues which the court is being asked to make a finding.
He said the application under certificate brought by city lawyer Mohamed Nyaoga, Guto Mogere and Mohamednasir is extremely urgent ought to be heard during the vacation and the same be disposed off.
The judge pointed out that the application and co-companies are international organization whose confidence must be bestowed to encourage other foreign investors.
A section of MP’s hvowed to table a censure motion in Parliament against the Education Cabinet Secretary, Jacob Kaimenyi over the ‘botched’ laptop project.
Education Cabinet Secretary Jacob Kaimenyi said he will not resign over the school laptops tender row.
On March 11, 2014, the Public Procurement Administrative Review Board cancelled award of the tender to olive Ltd and ordered a new tendering process with express directions that Olive should not participate in it.
The CJ’s order constituting the bench is dated April 1, 2014.