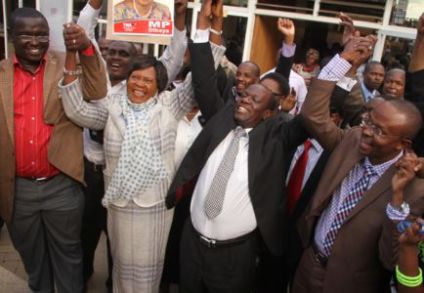 Othaya MP Mary Wambui with his Juja counterpart Munyua Waititu and his Lawyer Cecil Miller (right) celebrate outside Supreme Court building after the court reinstated her as Othaya MP.

The Supreme Court yesterday reinstated Mary Wambui as the member of the National Assembly for Othaya and dismissed a ruling by the Court of Appeal that had nullified her election as Othaya legislator
All the seven judges of the Supreme Court unanimously agreed that the petition challenging Ms Wambui’s election was marred by technicalities and should not have been entertained by the High Court in the first instance as it was filed out of time.
“In the circumstances, Ms Wambui’s contentions are allowed and the Court of Appeal’s decision which nullified her election is declared null and void,” said Chief Justice Willy Mutunga.
Ms Wambui’s election was challenged by Peter Gichuki King’ara who claimed that the election was marred by irregularities and electoral malpractices.
The initial petition at the High Court was dismissed but Mr King’ara appealed the decision at the Court of Appeal.
“Parties cannot re-open concluded matters, a decision in principle applies to all parties who suffered a wrong,” Judge Mutunga read the ruling.
Lawyer Cecil Miller representing Wambui welcomed the ruling and said that the court had set a new precedent.
The Independent Electoral and Boundaries Commission will now not go on with the by-election that the Supreme Court had stopped temporarily.
Supreme Court also held that the same precedent set in the case of Mombasa Governor Hassan Joho election petition must apply in the Wambui case, and therefore withheld the results of IEBC in declaration of Mary Wambui as the validly elected MP for Othaya.
The decision noted that the High Court had found the Elections Act inconsistent with the Constitution but still opted to determine the petition.
The court held that the petitioner in High court filed his petition after the constitutional deadline had lapsed and that neither the High Court nor the Court of Appeal should have considered it.
On 12th September, 2013, high court dismissed the petition with costs, and confirmed the Wambui as the duly elected member of National Assembly for Othaya Constituency.
Supreme Court agreed with the high court decision that there is neither reason nor basis for this Court to order scrutiny and recount of the votes cast in the election of Member of the National assembly for Othaya.
“This Court has been keen to ensure predictability, certainty, uniformity and stability in the application of the law,” Judge Mutunga read the ruling.
Supreme court judges said they were silent on the effect of appellate court declaration of invalidity of a statute and therefore unequivocal about the invalidity of any action emanating from Section 76(1)(a) of the Elections Act.
The judges said: “while we have pronounced ourselves on the issue of invalidity of Section 76(1)(a) of the Elections Act, in line with the Constitution, this Court is not precluded from considering the application of the principles of retroactivity or proactively on a case-by-case basis.”
The court held that in Wambui case, the issue of invalidity of Section 76(1)(a) of the Elections Act is bound to the issue of time.
“Time, as a principle, is comprehensively addressed through the attribute of accuracy, and emphasized by Article 87(1) of the Constitution, as well as other provisions of the law. Time, in principle and applicability, is a vital element in the electoral process set by the Constitution,” reads part of the judgment.
Costs in the proceedings before the High Court, the Court of Appeal and Supreme Court, will be by each party respectively.