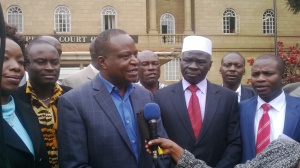 Nyando MP Fred Outa and his supporters outside Supreme court after Supreme Court upheld his election by a popular decision of the judges of the Supreme Court On July 4, 2014
BY SAM ALFAN.
The Supreme Court on Thursday upheld the election of Nyando MP Fred Outa, and dismissed a Court of Appeal ruling that had nullified his victory in the March 4 elections in 2013.
Outa moved to the Supreme Court in March 2014 to challenge the nullification of his victory by the appellate court in the same month.
Prior to the Court of Appeal decision, High Court judge Aggrey Muchelule, had on September 2013 upheld Outa’s election, but the verdict was later reversed.

“Testimony given before the trial court shows that there were funds disbursed between February 18 and March 4. Funds for whom the financial controller is a self-confessed Outa supporter but the burden of proof that he was simply not carrying out his functions and was out to sway the vote in favour of Outa lay with the petitioner (Jared Okello),” Ojwang said.
They therefore called on the Legislature to put in place safeguards, as they have done with civil servants, to ensure voters are not unduly influenced and free to exercise their political will.
“Because except where expressly stated, the Constitution guarantees the right to participate in the political process as the Nyando CDF Treasurer did when he wore the hat of ODM Chief Agent in Nyando,” Ojwang said.
Outa, as can be expected, lauded the Supreme Court decision to reinstate him as the right one and said he could now return to serving the people of Nyando, “distraction free,” given the penultimate judgement on his election.
“This is history, the people of Nyando have never had the same MP for two terms running and unless they want to take me to the International Criminal Court, it should send chills to my opponents for 2017.
I want to tell Kenyans that there are changes in the Judiciary and I want to go back to Parliament to support the reforms in Judiciary. ,” he said,
He further added that, the Nyando people I’ll roll down tomorrow to continue the projects that had stalled because of this court case.
Outa came out victorious after spending a couple of months in apprehension following the appeal court decision to nullify his win.