KIMUNYA CHARGED A FRESH OVER ABUSE OF OFFICE. 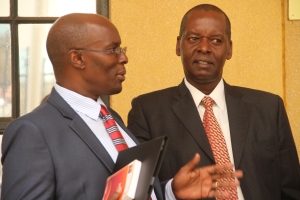 Former finance minister Amos Kimunya has been charged a fresh together with his brother over abuse of office and fraudulent acquisition of public land.
Kimunya who appeared in this morning of the criminal case, was surprised when the prosecution the trial court it was making some changes on the previous charge sheet.
The move by the prosecution was strongly opposed by the defense lawyers, who told the court that they could not proceed with new charge sheet which had not supplied to them so as to seek instruction from their clients
The trial Magistrate Peter Ndwiga, however allowed the application by the defense team to enable look at the charge sheets the matter had been fixed for hearing in two days.
The prosecution accuse Kimunya that June 30, 2005 while working as minister for Land at Ardhi House he allegedly used his office to confer a benefit on Midlands limited by causing to be allocated to him.
The former minister is charged alongside Lilian Wangiri Njenga former director of Land Adjudication and Settlement at the ministry of Lands and Housing and his brother Junghae Wainaina.
The prosecution has line up 12 witnesses among for Agriculture minister Kipruto arap Kirwa, the court fixed the hearing of the case on October 8.