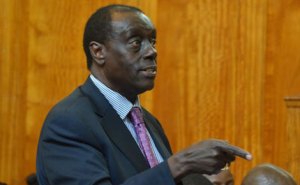 BY SAM ALFAN.
Late and former cabinet minister Professor George Saitoti’s brother will be charged tomorrow alongside Machakos Senator Johnstone Muthama and seven others over the Maili Ranch scandal
Ronald Leposo Museng’s i attempt to scuttle the plea taking was declined by the high court.
The accused who a member of police national service commission put spirited effort to spot his prosecution by filing a judicial review application seeking to restrain the director of public prosecution from preferring criminal charges against him.
The applicant through his lawyer Charles Koech, told vacation judge Justice George Odunga, that the criminal proceedings have been brought him out of malice and in bad faith.
The lawyer told the court previous investigation over the land scandal did not link him with sale or causing a felony as alleged in the intended charge sheet.
Senior counsel Paul Muite has been appointed special prosecutor by the Director PublicProsecution strongly opposed the application for conservatory order to stay further proceedings before the chief magistrate’s court.
The court however directed that the applicant’s application challenging the criminal indictment be heard on 17 September 2014.
Those have been summoned to appear in court includes former Permanent secretary Bitange Ndemo, Zablon Agwata formerly of the ministry of Lands and five others to the charge of stealing and failing to adhere to regulation relating to procurement.
The ten are accused of defrauding the government of Sh 1 billion in the purchase of 5,000 acres of land located at Maili ranch in 2009.
The summonses were issued by senior principal magistrate Peter Ndwiga following an application by senior counsel Muite.
The prosecution of the accused was recommended by the office of the director of public prosecution on account of investigations by the Ethics and Anti- Corruption Commission.