NACADA HAS BEEN RESTRAINED FROM REGULATING THE CONSUMPTION OF MIRAA. 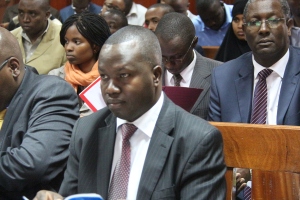 BY SAM ALFAN.
National Agency for the Campaign Against Drug Abuse (NACADA) has been restrained from purporting to limit and restrict consumption of Miraa, pending the hearing and determination of a suit filed against it.
Vacation Judge Justice George Odunga, said that until the matter filed by Kenya Miraa Farmers and Traders Association is determined by the court the agency should not carry out publication, seminars aimed spreading negative campaign against the consumption of the crop.
The farmers through their lawyer Henry Kurauka, told the court that NACADA has purported to limit the time frame at which Miraa should be chewed.
The lawyer said the action is illegal and irrational as it affects the farmers and other consumers, saying that the organisation has no legal mandate issue such restriction.
He said that Miraa consumers and farmers have been consuming Miraa for decades without any medical or any social adverse effect.
The court heard there is no known medical problem that has been associated with consumption of the crop.
The decision by the Agency through its chief executive officer Dr William Okedi was arrived without consulting the farmers and should be considered as unlawful, the lawyer told the court.
The judge directed that the application and the orders be served upon the NACADA and the matter heard inter parties on 16 September 2014.
Ends.