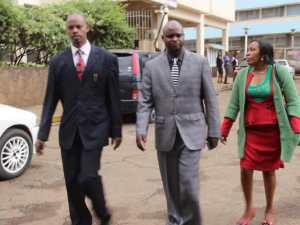 Industrial court has allowed Kenya National Union of Nurses to commence contempt proceedings against one of their own.
The union wants Seth Panyako committed to civil jail for disobeying a court order restraining from convening National Governing Council meeting of the union.
The sad order was issued on 28 August 2014 and has been set aside by Mr Panyako, he however proceeded and held the meeting to the contrary.
The union told Justice Mathews Nderi, the power and dignity of the court stands to be undermined unless the contenor is punished.
The court heard thar Mr Panyako be denied audience until he purges the contempt as required by law.
The contempt application will be heard on 24th September
Meanwhile seth panyako insisted the nurses strike is on while the other function led by wandereba said that the procedure used to call for strike was illegal hence there was no strike as purported.