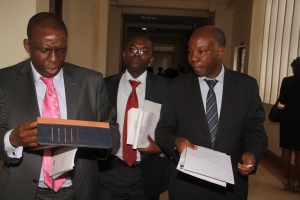 British American Investments Company lawyer Fred Ngatia with other two lawyers leaves Milimani law courts after the High Court dismissed its application and extended orders to Britam Company.
On Thursday (27/11/2014).
By SAM ALFAN.
Acorn Group’s bid to have its frozen accounts opened has suffered a major blow after the High Court dismissed its application and extended orders to Britam Company.
Justice David Onyancha dismissed the an application by Acorn that he had no authority to grant temporary orders that froze its accounts bearing more than 3.9 billion shillings that formed the dispute between Britam’s four former employees Edwin Dande, Elizabeth Nkukuu, Shiv Arora and Patricia Wanjama,who are also Acorn founders.
The judge ruled that the court had the powers to issue orders maintaining a status quo of a matter until the dispute between the contesting parties Acorn Group’s and Britam is resolved.
Britam through its lawyer Fred Ngatia had argued that if the defendants were allowed to continue operating the accounts, then the company would suffer irreparable damage.
In the case Britam is seeking to recover 3.94 billion Shillings from former executives who quit its asset management unit, in August sparking a heated legal battle between the firm and Acorn. Acorn wanted the orders freezing their accounts lifted.
Justice Onyancha noted that all parties in the case had attended the court on November 12 and the same orders were extended adding that the real estate company should give an undertaking to the effect that the orders issues will be found to have been issued out of a lie from the company.
He said that this undertaking will shield Acorn from suffering if the case will be ruled to its merit.
Britam has accused four former employees Edwin Dande (chief executive officer), Elizabeth Nkukuu (portfolio manager), Patricia Wanjama (head of legal) and Shiv Arora (investment analyst) of illegally
transferring Sh3.9 billion from its accounts to Acorn’s earlier this year.

The firm through lawyer Fred Ngatia wanted the judge to extend the freeze on the bank accounts and the development of seven properties in Nairobi, Kajiado and Machakos Counties.

“Since the application has not been heard yet, then the reasons why the court granted the orders are still alive,” said Mr Ngatia.

Ngatia also sought the orders to apply to all four suits it has filed in its fight to recover the alleged loss of the monies to the former employees.

But the application to extend the orders has been opposed by Cytonn and Acorn, who argue that the court cannot extend interim orders that were given in the absence of an accused person.

“We oppose the extension because it is not based on any law,” Walter Amoko who is representing Acorn said.

Amoko’s opposition was backed by Ochieng Oduol, who is representing Dande and Nkukuu.
The case will be mentioned on December 4.