DRIVER AND CONDUCTOR OF GITHURAI 44 BUS STRIP CHARGED WITH ROBBERY WITH VIOLENCE. 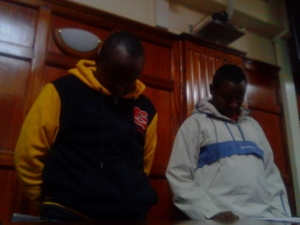 Nicholas Chege Mwangi and Meshack Chege Mwangi at Milimani law courts where they are accused of assaulting a female passenter.
BY SAM ALFAN.
A driver and a conductor of a commuter bus in Nairobi, in which a 21 year old female passenger was stripped naked and sexually assaulted has been charged in a Nairobi court.
The Two were arrested after a woman was allegedly stripped and sexually molested inside their vehicle have been charged with robbery with violence and manipulating the complainant’s genitalia without her consent.
Nicholas Chege Mwangi and Meshack Chege Mwangi are accused on the nights of 19 and 20 of September 2014 at Millennium petrol station Githurai 44 within kasarani district within Nairobi county, jointly with others not before court robbed H.E.W of a mobile phone make Samsung galaxy grand valued at ksh 27,00,one bottle of perfume valued 15,000,one clutch bag valued at Kshs 1000,a make-up kit at Kshs 200 and a cash o 10,200 all valued at Ksh 41,700 and at or immediately before or immediately after the time of such robbery used actually violence to said H.E.W
They are further accused that on the same night at Millennium petrol station Githurai 44 within kasarani district jointly with others unlawfully manipulated their fingers in to the genital organs of H.E.W.
They both pleaded not guilty to the charges.
The prosecution was allowed to conceal the victim identity after they made an application to allow them to conceal the victim identity in the charge sheet due to what she went through, and her privacy which is entitled in the constitution.
Accused lawyer Harrison Kinyanyui had protested the prosecution application saying the accused are entitled to know their accuser s but the magistrate said the accused will be referred with initial during plea time as H.E.W until she testifies in the case that has drawn international attention.
Their lawyer Harrison Kinyanyui made an application for the accused to be released on bill but prosecution objected to the application and requested the court not to release the suspects on bail for their own safety due to the public outrage the acts, which was caught on camera and uploaded on the internet.The court will make a ruling on whether to release them on bill tomorrow morning. They were remanded at industrial area prison
Earlier the owner of the matatu through lawyer Harrison Kinyanyui requested the court to release his bus but the court declined to issue the order to release the bus.
Prosecutor Duncan Ondimu said the bus cannot be released since it’s a crime scene where the lady was assaulted for hours in shocking case captured on video and uploaded on the internet that attracted international attention.
“The conductor of the bus confessed his own phone was used to record the video which the victim was capture being assaulted on the bus, The owner of the vehicle also confessed the two accused were on the duty during the event” Said prosecutor Duncan Ondimu.
There has been an increase of sexual assault and stripping of ladies which has caused great public apprehension.
Hundreds of protesters took to Nairobi streets to condemn the humiliating public stripping of three Kenyan women earlier last month.
The mobilization for the protest started through social media under the hashtag #MyDressMyChoice.
Protesters marched from Uhuru Park to the Embassava Sacco bus stage on Accra Road, where people alleged to be touts were earlier filmed ripping off a woman’s clothes for allegedly dressing indecently.
The Sacco officials, however, have denied that the people who stripped the woman were their employees and instead blamed layabouts, whom they did not identify, for the act.