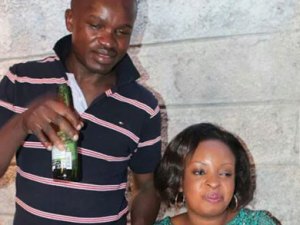 ABuruburu man nicknamed ‘Idiot’ who allegedly shot dead his lawyer wife Linda Wanjiku Irungu a mother of one son in Buruburu last week has been arraigned before a Makadara Magistrate court on Monday.
However, Erastus Ediot Odhiambo the bar owner did not take plea after police sought more days to remand the accused for seven more days to complete their investigations on the matter.
Investigating officer on the matter swore an affidavit before a Makandara acting principal magistrate Eunice Nyutu seeking more time to complete his investigations.
“The relatives and friends who were at the scene had not recorded their witness statements,”
Odhiambo told the court.
Lawyer Ian Maina was appointed to hold brief for the Law Society of Kenya on its behalf since the deceased was a member of the legal body until her departure..
Odhiambo has been accused of shooting and killing his wife Linda Wanjiku Irungu a mother of one son last Friday at around 3am.
Friends and relatives said Linda Wanjiku Irungu a mother of one son constantly complained that her
husband physically abused her, especially when he was drunk.
“We asked her to leave on several occasions but she said her husband would change,” a close friend of Ms Wanjiku told local daily.
On the fateful Friday morning, Linda’s husband, Erastus Ediot Odhiambo, arrived home at around 3 a.m. and found his wife missing. He left and returned an hour later to find her in the house.
A quarrel ensued.
Ms Wanjiku, who was Odhiambo’s second wife, had attended a party with friends. She had stated on Facebook page earlier in the day “Happy Thursfriday to y’all, catch you later my pals.”
According to the lawyer’s sister Diana Irungu, the couple began quarrelling at around 4.30 a.m.
“My sister decided that we leave for our parents’ home in Buruburu Phase 2. When she started driving, her husband caught up with us, opened the car door and pulled her out,” she said.
Ms Irungu said Mr Odhiambo then pulled out his gun and hit her sister on the back of the head several times as she lay on the ground.
“He kept kicking her and even fired at her despite my pleas that he lets her go. I then called my father and brothers,” she said.
Hellen Wesonga said she went to the compound with other neighbors minutes after hearing the gunshot and found Ms Wanjiku lying unconscious on the ground.
“I saw Linda’s sister screaming while her father and brother tried to lift her into the car. Her husband kept blocking and asking them to leave her alone,” she said.
With the help of neighbours, Linda’s father and Brother Renson Karanja put her in the car and drove to Jamaa Hospital where she was pronounced
dead. “My sister was unconscious when we arrived and that is why we decided to take her to the nearest hospital,” Mr Karanja said.
Ms Irungu said her sister and husband have had differences for long. According to the post mortem
examination results, Ms Wanjiku’s body had a bullet wound on the upper right side of the back.
Magistrate Nyutu ordered that the accused be remanded at Buruburu police station until December 23 when the matter will be mentioned for further directions..