COMMUNICATION AUTHORITY OF KENYA GIVEN 24HOURS TO CANCEL JOB ADVERT. 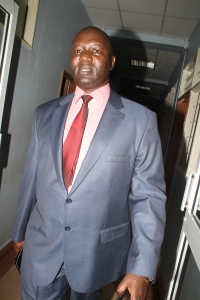 Industrial court has directed the Communications Authority of Kenya to advertise a notice cancelling advertisements that announced vacancies within the organization.
Justice Nzioka Makau sitting in Nairobi also issued orders restraining CAK from interfering with their employee’s positions and ranks and from taking further steps to rename, modify, restructure or scrap the positions of Director, Radio Frequency Spectrum; Director, Legal Services and Commission Secretary; Director, Finance and Accounts Among others.
The Judge said the advertisement should be done within the next 24 hours. The order comes after the Communication workers union moved to court to challenge the renaming and modification of their positions within the organization.
The staffs moved to court yesterday through their lawyer professor Tom Ojienda challenging the Communications Authority of Kenya’s decision to declare 30 senior management positions vacant in a move the regulator claims is provided for following its transition from the Communications Commission of Kenya.

CUWU on Tuesday moved to the Industrial court expressing uncertainties that they may be rendered unemployed or subjected to reduced remuneration if the board goes ahead to implement the new structure.
Communications Workers Union (COWU) has claimed in a suit lodged against CA that the law provides for the regulator to retain any staff that was working for it at the time of the promulgation of the Constitution.
The Union faulted the Board that by the mere fact that it was interviewed and hence they would like to advertise and carry out interviews for positions currently occupied by staff was a breach of their employment terms.
Through Senior Counsel Professor Tom Ojienda, CUWU said section 41(2) (a) of the Kenya Information and Communications (Amendment) Act No. 41A of 2013 had itself provided for transition of the said staff.
The communication authority of Kenya board of directors renamed the positions held by the petitioners without any legal procedure.
The board is accused of suspending any provision of its Human Resource Policies Manual that conflicts with the renaming process notwithstanding that the Manual is part and parcel of the CCK Contracts of Service with its employees and can thus be only suspended upon mutual consent with the affected employees.
CUWU alleges that the positions of the rest of the staff in the organization remain uncertain without any clear communications to such staff hence causing anxiety in the organization about the possibility of also being declared redundant.
The workers said: “All processes arising from any such Advertisement are superfluous, null and void for all intents and purposes.”
They seek to stop the CAK from recruiting new staff to the newly created positions. About 29 staff, according to the court records will be affected with the decision of the board of director to change the structure of CAK management.
The petitioners argue that the new structure merely changes the nomenclature of Director to Chief Manager and the Assistant Director to Senior Manager and introduces 3 new positions of General Manager.
The petitioners want the action by CAK board of directors to advertise the positions of its employees serving in the positions of Director and Assistant Director be declared a breach of the employees’ rights as provided in the law.
“If this flawed process by the Respondent is allowed to stand, the rest of the staff, including ‘Unionisable’ employees will be adversely affected since it will trickle down to all employees of the Respondent,” Professor Ojienda outlined in the petition.
The aggrieved staff says that they have neither been notified nor was the Labour Office of the decision to render the employees of the CAK.
About 29 staff, according to the court records will be affected with the decision of the board of director to change the structure of CAK management.
The CAK Board Chairman, is accused of insubordination, the petitioners say his role is to play the policy oversight has since advertised the positions thereby taking over the role of the Director General, who is the accounting officer.
The case will be heard on January 12 2015 for further directions.