GATUNDU MP NOT OUT OF HOOK AS NCIC GIVEN 30 DAYS TO COMPLETE NEGOTIATIONS. 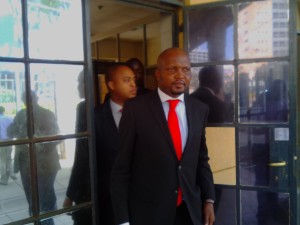 Gatundu South Member of Parliament Moses Kuria leaving Milimani law courts after they informed the court on steps made on the reconciliation process over hate remarks he made on social media.
BY SAM ALFAN.

Gatundu South Member of Parliament is not yet out of hook after the NCIC told the court negotiations are not yet completed.
Nairobi Senior Magistrate Enock Cherono has given them a duration of one month to complete negotiations or commence the case over hate remarks he made on social media.
This is after the Gatundu South legislator Moses Kuria appeared in chief Magistrate court to give details on the progress they made towards the reconciliation process with National Cohesion and Integration Commission.
The appearance of the Mp follows a press conference he held with commission and Law Society of Kenya where he stressed to need to halt trading words with opposition politicians.
The MP was charged with hate speech in a Nairobi court.
He appeared in the Nairobi Chief Magistrate’s court, denied the charges and was released on a Sh2 million cash bail and a Sh5 million bond.
Mr Kuria was also charged with incitement, hate speech and causing ethnic contempt in Facebook messages allegedly posted on May 16.
Trial Senior Principal Magistrate Encok Cheorno, said that the court has noted the progress made so far and directed that the matter be mentioned on February 17 for further directions.
In July last year, the DPP wrote to the NCIC to review if statements made by Mr Kuria regarding the killings in Lamu constituted hate speech.
The MP is being charged with incitement, hate speech and causing ethnic contempt in Facebook messages allegedly posted on May 16 this year.
LSK had said the Facebook posts were intended to incite the public to violence against a specific community.
Prosecutors said that on May 16, he posted a message on the page with the intent to stir up ethnic hatred between the Kikuyu, Luo and Somali communities.
The post read: “I think it is only a matter of time before Kenyans start violence against PERCEIVED (sic) terrorists, their sympathizers, their financiers and those issuing travel advisories without intelligence. I am not sure I will not be one of those Kenyans. When you touch Gikomba the nerve center of our economic enterprise, you really cross the line. Brace yourself. Choices have consequences.”
The recommendation to prosecute Mr Kuria was made by the National Cohesion and Integration Commission after complaints by the Law Society of Kenya.
Kuria’s case has been ongoing even before he became the MP after the Independent Electoral and Boundaries Commission (IEBC) declared him the Gatundu South lawmaker after his challenger withdrew at the last minute.
Barely hours after he made a public apology for posting hate remarks on his Facebook page, Gatundu South MP Moses Kuria was at it again, his sensational statement this time referring to the Bible.
He referred to Genesis 17:14 which says: “And the uncircumcised man child whose flesh of his foreskin is not circumcised, that soul shall be cut off from his people; he hath broken my covenant.”
The post created a storm in social media, attracting nearly 300 reactions. Kenyans felt the MP was not sincere when he made the apology.
The matter to be mention on 17 of February to update the court proposed reconciliation.