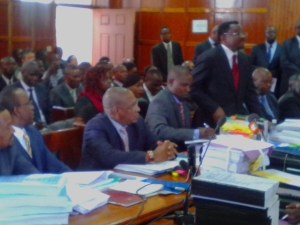 Coalition for Reforms and Democracy (CORD) lawyers James Orengo, Anthony Oluoch ( center) and Director of Public Prosecution Keraiko Tobiko at Milimani law courts during the first day of the hearing of the petition challenging the Security Laws (Amendment) Act 2014 that was filed by Cord last year (28 Wednesday 2015).
BY SAM ALFAN.
Coalition for Reforms and Democracy (CORD) has renewed their call over the enactment of the controversial Security Amendment Act 2014 that is meant to curb rising insecurity unleashed by terrorism as being unlawfully and illegally passed by parliament.
Opposition submitted that the controversial security laws amendment bill was passed unprocedurally and without public participation.
CORD through lawyer James Orengo told a five judge bench that President Uhuru Kenyatta was misleads to assent to the bill which never followed the due process of the law as provided by the constitution.
Orengo told the bench presided by Judge Isaac Lenaola and Mumbi Ngugi, Hilary Chemitei, Hedwig Ongudi and Louis Onguto heard that the Speaker of the National Assembly Justin Muturi was partisan in the chaotic debate that resulted in the passage of the bill last December.
“The speaker of the national assembly contravened the constitution by failing to refer the Bill to senate so as the two speakers could have made a determination as required by law” said Orengo.
Orengo further argued that public participation was restricted because the time allocated was inadequate and committee meetings were held at odd hours in contravention with the constitution.
“There was no debate in the House as witnessed by the public, the amendment bill was rushed and speeded without giving public participation” Orengo added.
The Bill sought to amend several provisions of the public order Act (cap5), penal code, extradition, criminal procedure code, registration of persons, evidence, firearms rent restriction Acts among others undermine and violate the constitution.
The court heard the Bill contains several offensive provision namely Section 4,5,12,16,25,26,29,34,48,56,58 and 64 Security Law (Amendment)Act 2014 of the security thus it breached the constitution.
Cord lawyer James Orengo sought the court to halt the operationalized of the Section 8,9 of the Public Order Act, Section 66A(1) and (2) of the Penal Code and Section 42 and 344(a) of the Criminal Procedure Code the Bill unconstitutional.
Justice Lenaola led bench heard that the law passed contravened the constitution and the same cannot be presumed to be good law.
They heard that the amendment contains offensive provisions and affect lives of Kenyans if the same is allowed to come into operational.
The Bill sought to amend several provisions of the public order Act (cap5), penal code, extradition, criminal procedure code, registration of persons, evidence, firearms rent restriction Acts among others undermine and violate the constitution.
The court heard that the debate was rushed and hastened and the Bill was steamrolled and speed in the assembly thus violating the principle that the minority must have their say even if the majority has their way because of the tyranny of numbers enjoyed by one side of the house.
Court of Appeal dismissed an application by AG seeking to stop the suspended the operation of eight sections of the anti-terrorism law.
Appellate judges Daniel Musinga, Patrick Kiage and Agnes Murgor ruled that Attorney-General Githu Muigai had not proved that the suspension of the clauses had created a vacuum in fighting terrorism.
The new regulation relating to arresting a person and withholding him or her for period of 90 days without explanation should not be applied.
The appellate court held that there was no vacuum in the constitution that would stop the government from enforcing the law in regard to the section suspended by Justice George Odunga.
Justice Odunga found that new regulation relating to limiting number of refugees to the county is discriminative in nature and in consistence to international instruments and treaties to which Kenya is signatory.
The learned Judge upheld the position of United Nations Refugee Convention and Protocol that relates to protection and non-discrimination of refugees should be allowed to seek asylum without necessarily limiting their numbers as it in the case under new laws.
National Intelligence Services will not interfere with the privacy of individuals as proposed under the new Act, the court said this new amendment needs to be investigated and determination made.
The court further put on hold the anti-terrorism Act, saying the way in which the provisions are framed is too broad and imprecise and may be abused and recklessly applied beyond mischief as its expected.
According to Orengo the Bill 2014 was published in a special gazette supplement No 163 under the hand of Chairman on Administration and national Security Asman Kamama.
The Clerk of the National Assembly on December 10 published in the local dallies an advertisement intended to be an invitation to the public to present their memoranda on the proposed Bill.
The notice was in violation of express provision of the constitution and in particular Article 10(2)(a) and 118(1) (b) of the constitution as it did not afford the people any meaningful opportunity to participate in the bill by giving a notice the same day the purported public participation was to commence.
“Under Article 132(2)(a)(c) and (e) the head of state has an obligation and duty to respect, uphold and safeguard the constitution promote and enhance the unity of the nation and to ensure the protection of human rights and fundamental freedom and the rule of law” added Orengo.
The hearing will continue tomorrow.