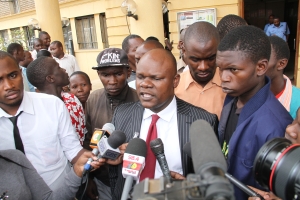 Football Kenya Federation (FKF) vice chairman Robert Asembo with the federation supporters addressing journalist outside milimani law courts building after court allowed to continue running league matches, pending the decision by court as to whether two former officials seeking to be enjoined in the suit brought against Kenya Premier League (KPL) is determined.at Milimani law courts on Thursday 5 March 2015.
BY SAM ALFAN.
Football Kenya Federation (FKF) has been allowed to continue running league matches, pending the decision by court as to whether two former officials seeking to be enjoined in the suit brought against Kenya Premier League (KPL) is determined.
KPL who have purported to conduct the league contrary to the court order will have to wait the decision by the judge.
Justice Roselyne Aburili extended the barring orders KPL from conducting parallel league matches, saying that the court has to deliver two rulings touching on application seeking to enjoin interested parties and contempt application brought against the directors of KPL.
The federation told the court that the embattled officials Dan Shikanda and Sammy Shollei were banned from participating in football affairs in the country for a period of six years.
Their application seeking to be enjoined in the civil suit biting FKF and KPL is not merited and they will not help solve the dispute, the court heard.
The federation’s lawyer Eric Mutua told the judge, that the two having been banned they cannot now seek to participate in matters they stand halted.
“By allowing them to participate in the proceedings will be violation of the ban and decision made by this court” the lawyer said.
The lawyer submitted that the two did attempt to quash the decision of the federation through a judicial review application proceedings, their application was dismissed by Justice Mumbi Ngugi.
“They are so aggrieved by the federation and their are being seen to support the rival party and that is reason why they are asking the court to enjoin them in the proceedings” the court heard.
Mutua told the court that during the dependency of the civil suit KPL directors proceeded to conduct league matches to the contrary of the orders issued against them.
He said that the directors having disobeyed the court order, they should be jointly cited for contempt and send to jail for period of six months.
The judge heard that the order having been served on February 21 and the directors were aware of the restraining orders; the court should exercise its power to punish them so as to preserve the dignity of the court.
Kenya Premier League (KPL) top officials risk being sent to jail for contempt of court, after they allegedly disobeyed court order requiring them not to run parallel games.
Civil division judge Justice Aburili was told that the officials have without colour proceeded to conduct the premier league matches when they are quite aware of the orders restraining them.
KPL officials Ambrose Rachier, Allan Kasavuli, Elly Kulekwa, James Musyoki, Bob Munro, Jack Oguda and Col Juma Munyikai should be punished for disobeying the court order.
Mutua submitted that decision by the court of appeal and supreme have defined service is not only personal but also getting to know the existence of the orders of the court.
“KPL managing director Jack Oguda received the order but declined sign or stamp as required by the law which demonstrate that the management were aware of the decision halting them from conducting league matches” he aid.
The decision to bar KPL was even a subject of discussion i the social media, no one can claim to have not heard or seen the order of the court.
Justice Aburili heard that the applicant FKE did even send emails to the directors of KPL in an effort to communicate to them over intended league matches of February 21.
The judge will deliver the ruling on contempt on March 13.