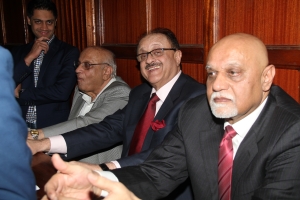 Controversial Tycoon Chamanlal Kamani, his son Deepak Rashmi and his brother Rashmi Kamani were charged before a Nairobi Chief Magistrate court for defrauding the government over Sh10billion in Anglo Leasing security contracts at Milimani law courts on Wednesday 517 March 2015.(PHOTO BY SMART SAM NEWS)
BY SAM ALFAN.
Former Finance Minister David Mwiraria failed, for the second time, to plead to Anglo-Leasing charges on Wednesday due to his health status.
His lawyer Kioko Kilukumi told Chief Magistrate Doreen Mulekyo that his client was unable to appear before her as he was bed ridden.
He therefore applied to have the matter of his client taking plea come up after 90 days; the amount of time he said his client’s doctor needed to determine when he will be physically able to appear before the anti-corruption court.
“What the doctor recommends is that he needs to follow up on this patient who is basically bed ridden, on a wheelchair. He cannot just come to court,” he submitted.
And as proof of his assertions, he presented to the court and to the Director of Public Prosecutions Keriako Tobiko, a medical report put together by an orthopaedic surgeon.
Mulekyo granted the application after Tobiko described the 90 day reprieve sought as, “reasonable,” and set June 26 as the date when the matter will again come up for mention.
On March 4 Kilukumi had again told Chief Magistrate Hannah Ndung’u that his client could not plead to the Anglo-Leasing charges alongside his finance predecessor Chris Obure and six others who included three former Permanent Secretaries as he had been admitted to the Karen Hospital at 1am that morning.
He also revealed that the reason he was admitted had to do with a hip he had replaced outside the country a week earlier.
“He returned to the country a week ago and was at Integrity House on Monday to have his fingerprints taken but he could not even exit the vehicle due to his condition,” he told Ndung’u.
Despite the delay in having Mwiraria plead to charges pinned on the 2003/4 Anglo-leasing deals, Mulekyo went ahead to set trial dates.
The first case for which Mwiraria is facing the charges of conspiracy to commit an economic crime and engaging in a project without proper planning has to do with the Sh3.9 billion Modernisation of Police Security Equipment and Accessories Project of 2003/4 and will be heard between July 20 and 31.
The second for whom he’s facing the additional charges of disobedience to statutory duty and abuse of office will be heard between September 1 and 11 and has to do with the Sh5.8 billion, “E-Cops,” project meant to computerize security, law and order systems and procedures of the Kenya Police.
He is charged alongside tycoon Deepak Kamani and his brother Rashmi Kamani in both cases.
Earlier today lawyer Ahmednasir Abdullahi has withdrawn as the legal representative of three firms charged over what has become infamously known as the 2003/4 Anglo Leasing deals.
Abdullahi told Chief Magistrate Doreen Mulekyo on Wednesday that he withdrew upon the realisation that his clients in the Anglo Leasing case, Deepak, Chamanlal and Rashmi Kamani, are neither directors nor shareholders in Infotalent Limited, Sound Day Corporation or Apex Finance Corporation.
“We took at the heat of the moment if I may put it like that. But upon further reflection we realised that the nexus between these companies and my clients are at best very tenuous,” he submitted.
He went on to challenge the Director of Public Prosecutions Keriako Tobiko to use his “vast powers” to track down the companies’ directors down.
“The DPP as probably this court knows has wide reach throughout the world. Let him look for them, let him bring them to this court at a time of his choice and liking,” he submitted further.
And while admitting that he could not force Abdullahi to act for the companies, Tobiko challenged the claim that the Kamanis did not play an ownership role in them.
“There’s a lot that we could say about it but maybe at another forum,” Tobiko countered.
Sound Day and Apex Finance Corporation stand accused – together with eight others – of conspiring to commit an economic crime, “to wit, engaging in a scheme to defraud the Government of Kenya of Euros 40,000,000.”
The two companies also stand accused – together with Deepak, Chamanlal and Rashmi Kamani of fraudulent acquisition of public property.
“Euros 1.2 million from the Ministry of Finance on the pretext that they were able to provide credit to the government of Kenya for purchase of security equipment under modernisation of police equipment and accessories project,” the charge sheet reads.
Former Permanent Secretary in the Office of the President Dave Mwangi stands accused alongside the companies for, “failing to carry out due diligence test on Sound Day Corporation to ensure that it had professional, technical and legal capacity to enter into a contract for the modernisation of police equipment and accessories project.”
He and former Finance PS Joseph Magari also stand accused of improperly conferring a benefit to the company in relation to the above deal.
Infotalent on the other hand stands accused of “engaging in a scheme to defraud the Government of Kenya of Euros 59,688,250 through a supplier’s financing agreement for a Kenya Police project code named E-Cops.”
The E in E-Cops refers to the plugged computerization of security, law and order systems and procedures.
As was the case earlier, Infotalent also stands accused of the fraudulent acquisition of half a billion together with the Kamanis who are described in the charge sheet as the, “beneficial owners of the assets in the account of Infotalent Limited.”
Former Finance Minister David Mwiraria, his PS Magari and Mwangi also face several counts of conferring improper benefit to Infotalent, for failing to ascertain their qualifications and for approving payment without confirmation of services rendered.