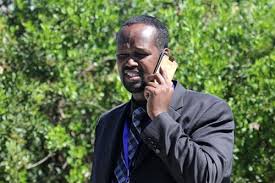 Mandera County government Ali Roba who the two petitioners want removed from office for breaching the constitution.
BY SAM ALFAN.
Mandera County government has been taken to court over misuse of public resources and discrimination against section of the local people.
Three applicants have approached the court seeking orders to have the county governor Ali Roba removed from office for breaching the constitution.
The trio Mohamed Hussein Omar, Mohamed Adan Dube and Abdil Muhsin Yusuf claim in their petition that the governor, Senator, County speaker and clerk to the assembly have misappropriated funds meant for development of the county.
The petitioners through lawyer Steve Mogaka seeks an order to compel Ombudsman, The Ethics and Anti- corruption Commission and the controller auditor general to conduct investigations to establish how funds allocated to the country have been utilized.
The lawyer told the court, that the applicants have evidence linking the governor and senator for corruptly using money to a acquire properties without following the public procurement procedures.
”Contracts are awarded without advertising as required by the law which has led to misuse of public funds” the applicants states.
They want the court issue a declaration that the threshold has been made to have the governor removed from office under article 181 of the constitution and the EACC and the auditor general execute their mandate without delay.
The petitioners have questioned the award of the constructions of the road within the county which works commenced before the tenders were announced.
They want the auditor general to investigate the awards of the tenders and have report made public in order to bestow confidence of the local people
The matter will be placed before Justice Isaac Lenaola on July 4 for directions.

One thought on “MANDERA GOVERNOR ALI ROBA SUED OVER MISUSE OF PUBLIC FUNDS.”

Mandera County government has been taken to court over misuse of public resources and discrimination against section of the local people.