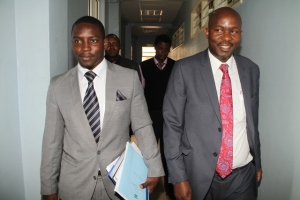 Keter and Ms Birdi who have been under investigation by the Ethics and Anti-Corruption Commission argue that the Gilgil incident was a disciplinary issue for which the watchdog cannot institute criminal proceedings against them. EACC, Mr Keter says, can only pursue individuals over economic crimes.
The two MPs were in January caught on camera storming the Gilgil weighbridge and hurling insults at officers manning the bridge. Director of Public Prosecutions Keriako Tobiko gave police and the anti-corruption watchdog the green light to arrest and charge the two on Monday.
“My clients aren’t under investigation for having committed any economic crime, but on how they conducted themselves as public officers during the incident. Only the National Assembly speaker has jurisdiction to institute disciplinary proceedings against them,” their lawyer Okong’o Omogeni said.
Justice Mumbi Ngugi declined to issue orders stopping their arrest until EACC and Mr Tobiko, who has been enjoined to the suit, respond to his suit. She ordered the parties to appear before her on Monday.
Mr Keter claims that the DPP has also recommended disciplinary action against him and Ms Birdi to Parliament, which will expose them to double jeopardy as they will face two separate proceedings over the same matter. Their intended arrest, the MPs claim, is political.
The MPs claim that they intended to raise the same complaint with the anti-graft watchdog but its lack of directors forced them into moving to court. EACC chair Mumo Matemu resigned on Tuesday after earlier resignations by the other two commissioners-Irene Keino and Jane Onsongo.
“Mr Keter and Ms Birdi have been specifically singled out merely because they are Members of Parliament with the power to generate publicity for EACC,” Mr Omogeni added.
“Its only parliament through the Speaker of the National Assembly who has the power to institute disciplinary proceedings against the petitioners” Omogen told the court.
The court ordered that the application be served upon EACC and DPP and the matter be heard inter parties on Monday 18.

One thought on “KETER AND BIRDI SEEK COURT PROTECTION.”

The court ordered that the application be served upon EACC and DPP and the matter be heard inter parties on Monday 18.