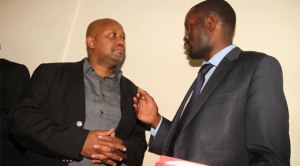 Political analyst Tonny Gachoka and his lawyer Edwin Sifuna at Employment and Labour Relations Magistrate Court in Nairobi after he presented himself to court following warrant of arrest issued by Magistrate after he failed to honor summons.

BY SMART SAM NEWS TEAM
High Court Wednesday gave directions to top Television host to conclude contempt proceedings bedeviling him at a magistrate’s court.
The Award Winning journalist had contested that the lower court had no jurisdiction to hear contempt proceedings leveled against him.
Seniour resident margistrate Maisy Chesang had issued arrest warrant against them for failing to appear in the court.
However, Justice Weldon Korir of Nairobi’s Mililani High Court Constitutional division said, “Though the applicants have an arguable case, they should appear before the presiding magistrate on June 5 and clear with her. Court orders must be respected.”
Korir pointed out that though Koinange and political adviser Tony Gachoka have an arguable case, the two should clear with the subordinate court which they aggrieved it.
The duos are through veteran lawyer and publisher of the Magazine “PLATFORM” Gitobu Imanyara, told the court they were not served with summons.
Imanyara said his clients could not be served with court orders due to recent rains which caused most parts of Nairobi to flood. On Tuesday, Koinange was arrested in his Kitusuru home.
Appearing separately before Senior Principal Magistrate Linus Kassan, the duos were charged for apparently discussing a subject which is subject to court’s jurisdiction.
Later on, they were released on a cash bail of Sh100, 000 and Sh50, 000 respectively. Gachoka presented himself before Kassan Tuesday afternoon.
Popular Jeff Koinange Live #jkl TV talk Show is mentioned in court records to be the platform where the alleged defamatory statements against Kwacha Group of Companies were uttered.
Jimi Wanjigi is a director of the group of companies playing an active part in the Nairobi Stock Exchange including Carbacid Investments Ltd which enjoys a near-monopoly in the supply of carbon dioxide for the beverage industry in East Africa.
The company has also stakes in East Africa Cables which manufactures electric cables, Kenya Airways, Paper house, Total (Kenya) and Barclays Bank.

The company directors, Messrs.’ Jimi Wanjigi and Sani Mbui Wanjigi told court that the accused ignored orders of the court not to discuss the company in the Kenya Television Network owned by the Standard Group.

One thought on “BUSINESSMAN TONY GACHOKA RELEASED ON BAIL.”

Political analyst Tonny Gachoka has presented himself to court following warrant of arrest issued by Magistrate after he failed to honor summons.