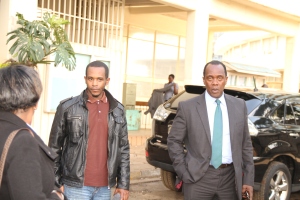 Seasoned TV show personality Jeff Koinange with his relatives at milimani commercial courts after he secured a ksh 200,000.

BY SAM ALFAN.
Seasoned TV show personality Jeff Koinange on Tuesday escaped jail by a whisker for the second time after the court ordered him to execute a personal cash bail of Sh200, 000 to secure his freedom for defying a court order.
Jeff Koinange has presented himself in court few days after he was slapped a fresh warrant of arrest for failing to appear in court as ordered by the court.
Jeff sneaked in court secretly and appeared before senior resident magistrate Maisy Chesang where plead with the cour.
This comes after he was issued with second fresh contempt of court charges after a warrant of arrest was issued this afternoon.
A court sitting in Nairobi’s Milimani, found that the Jeff Koinange Live Show host had not honored his bail terms and a Sh 100,000 bond was cancelled.
The warrant was issued for failing to attend court on Monday morning. Senior resident magistrate Maisy Chesang who was to hear the case, ordered Koinange’s immediate arrest.
Last week, the Peabody Award Winning journalist was arrested at his home and charged with contempt of court last week, was released on a Sh100, 000 cash bail after he failed to appear in court over a defamation suit.
Koinange was charged along businessman Tony Gachoka for discussing a case on TV despite being ordered not to.
The lawyers last week managed to secure Koinange bail and said he would not abscond court sessions. Political analyst Tony Gachoka was however present in court on Monday.
Koinange and Gachoka were sued by business tycoon Jimi Wanjigi for allegedly linking his firm, Kwacha Group of Companies, to the Anglo-Leasing scandal.
They allegedly uttered defamatory statements linking the company to the scam during Koinange’s TV show in May 2014 and March this year.
Mr Koinange is facing contempt of court charges for failing to appear in person before the Chief Magistrate’s Court in a defamation suit filed by tycoon Jimi Wanjigi. The talk-show host was arrested yesterday morning outside his Nairobi home, five days after a warrant for his arrest was issued.
Resident magistrate Maisy Chesang ordered last Thursday that Mr Koinange be arrested alongside businessman Tony Gachoka after they failed to attend a defamation suit. Acting Chief Magistrate Linus Kassan held that the cash bail is sufficient to guarantee Mr Koinange’s presence in future proceedings.
However, the arrest warrant against political adviser Tony Gachoka is still in force who together with Koinange allegedly committed court contempt in KTN’s JKL show.
Senior Principal Magistrate Linus Kassan released Koinange at 3pm after being held for more than seven hours at Milimani Law Courts, Upper Hill, and Nairobi.
Though Koinange was not thrown into the cells, he was held at the prosecutions chambers after being arrested while leaving his Kitsuri home in the city.
“If someone can be arrested four days after a warrant is issued, that person can be termed as a flight risk. Having considered all arguments I order that Mr Koinange be released on Sh100,000 cash bail,” Mr Kassan ruled.
Kassan said since Koinange was arrested four days after the warrant was issued, it would be unfair to jail for the court contempt while he has filed another suit at the High Court challenging their arrest.
“Since there is a judicial review suit at the High Court, the contemnor is released on a cash bail of Sh100, 000 before he appears on the presiding magistrate on May 25,” he said.
He warned Koinange to respect the court saying though he is a public figure everybody must respect it.
Lawyer Nicholas Nyamai had earlier told the court that they wanted to arrest Koinange on May 14 as he was conducting JKL show at Intercontinental Hotel but he protested on the live broadcast that court bailiffs wanted to arrest him thwarting their efforts.