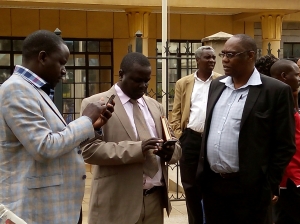 National Secretary Edward Obwocha, National vice chair Julius Korir and National Organizing Secretary Paul Mwangi outside Milimani Law courts after Industrial court blocked Teachers Service Commission from deducting member’s money towards the contribution of the proposed medical insurance scheme .
BY SAM ALFAN.
Kenya Union of Post Primary Education (KUPPET) obtained temporary orders stopping the Teachers Service Commission from deducting member’s money towards the contribution of the proposed medical insurance scheme.
Industrial court Judge Monica Mbaru issued the order after the union accused moved to court accusing the Teachers Service Commission of failing to consult them, over the double deductions.
They term the move by their employer as unfair labour practices. Kuppet says the move by TSC is a violation of their rights to join a scheme of their choice.
Kuppet says the have protested to the Teachers Service Commission but they have refuted the said claims indicating that there was no preferred scheme, and that the procurement of health solution provider will follow the due process.
“The obligation on the members whose hard earned salary is subject to deductions on a account of this flawed and irregularly scheme amounts to the violations right to property contrary to the constitution” said in their affidavit.
National Hospital Insurance Fund (NHIF) dismissed claims that the Sh5.9 billion teachers’ medical cover is superior, even as teachers unions threatened to pull out of the fund. The fund has also maintained that deductions based on the “total income” shall remain as directed by the NHIF Act of 1998. The out-patient benefits will commence on July 1 although deductions started in April. NHIF Chief Executive Officer Simon ole Kirgotty said the scheme presented to civil servants is a social cover that will benefit many Kenyans. “We are providing an in-patient cover of up to Sh2 million. Our maternity cover has no limit. Outpatient cover is even more favorable to lower cadres who shall get treatment without any limit,” he said. Kirgotty said emergency evacuation and enhanced Group Life and Last Expense covers are also unparalleled. Kenya National Union of Teachers (KNUT) Advisory Council last week said the Teachers Service Commission (TSC) cover was superior and asked that teachers be exempted from the NHIF cover.
“We do not see why persons with superior medical covers cannot be exempted from the NHIF deductions,” said KNUT Secretary General Wilson Sossion.
He demanded that no teacher’s money should be deducted by NHIF anymore. “We want Sh320 back and no one shall be allowed to mess up with teacher’s money,” said Sossion. KNUT, together with the Kenya Union of Post Primary Education Teachers (KUPPET), Federation of Kenya Employees (FKE) and Central Organization of Trade Unions (COTU) demanded that all deductions be pegged on basic pay. “But total income is what the NHIF Act says deductions must be based on. It was not a boardroom decision,” said Kirgotty. Section 15 (3) of the NHIF Act says, “A contribution…shall be at such rate, depending on the person’s total income, as the board, in consultation with the minister, may determine.”
Your are here » Home » Kenya Kenya: TSC and NHIF fight over medical cover By Augustine Oduor Updated Monday, May 18th 2015 at 10:46 GMT +3 Share this story: “I don’t want to comment about teachers pulling out because this is a statutory deduction,” added Kirgotty. Kirgotty said the issue of enhanced NHIF rates was not a new. The new rates, he said, were based on a study conducted in 2010 by Alexander Forbes.
The case will be heard on June24 for further directions.