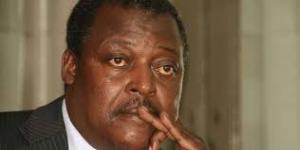 Former Lugari Member of Parliament Cyrus Jirongo who has been slapped with arrest warrant for failing to comply with court orders.
BY SAM ALFAN.
Nairobi Children court has slapped former Lugari MP Cyrus Jirongo with arrest warrant.
The MP was summoned to appear in court today because he had not complied with an order to produce the child before children’s court today.
Senior Resident Magistrate David Kuto issued warrant of arrest against the former legislator this morning for falling to comply with those orders which was issued earlier.
This comes few hours after the former Lugari MP Cyrus Jirongo moved to the high court yesterday seeking to suspend a decision made by Nairobi Children’s court which directed that he be stripped of custody of one of his child.
Through his Lawyer Ndung’u Karanja , Jirongo claims that the Nairobi Children’s Court presided over by Resident Magistrate ZW Gichana granted the child’s Mother Beth Waithera Mungai , interim Custody of the child yet she was a unfit to have the custody of child as she had abandoned the baby and exposed the baby to suffering.
Jirongo stated that the Resident Magistrate directed that the child be rescued from him by the state agents without according him a reasonable opportunity to be heard.
In his application, Jirongo stated that there was a real risk that the child may violently be taken away from him unless orders and directions issued by the Children’s Court were stayed.
In a sworn affidavit, Jirongo explained that when the one year old was born, it remained with the mother but he would provide periodic material support for the upkeep of the baby and also periodically visit the child.
“All was well until May 15 2014 when I went to the upcountry and the mother consumed with anger stormed into my office and deposited the minor on a lounge seat in the office and left the baby alone. At that time only the secretary and members of staff were there,” he said in a sworn affidavit.
Jirongo said when the staff members noticed what the mother had done, they pleaded with her not to abandon the child clearly informing her that he had travelled upcountry but she did not heed to the appeals and left the child there alone.
“Quite unexpectedly and to their surprise, my employees were left with the burden of looking after the child which they did until I was able to make arrangements for the child to be taken to my home where the child has been living together with my family since then,” he said.
Jirongo said he made a report at Central Police Station after she made the act of abandoning the child with strangers.
He said later on June 9 a letter was delivered in his office and he requested the advocate to deal with it.
He later learnt that the mother had filed a civil suit at the Nairobi Children’s Court making allegations that portray him as irresponsible father. Resident Magistrate Gichana made orders that the minor be produced in court.
Jirongo said that on June 24, the Magistrate made a draconian orders granting interim custody of the child to the mother and directing that the child be rescued on sight by the organs of state without according him a chance to articulate his case.
Jirongo stated that the mother was a police suspect for the offense of abandoning and endangering a minor contrary to the law.
Jirongo wants the high court to stop the orders and directives given by the children’s court and also a stay of the decision made by the children’s court.
The case will be heard on July 7.