REPRIEVE FOR KEROCHE FACTORY AS COURT ORDERS POLICE TO REMOVE ALL PADROCK WITHIN 24HRS. 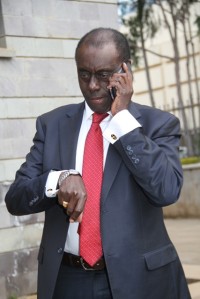 Senior counsel Paul Muite leave Milimani law courts after he successfully argued an application filed by Keroche Industries limited seeking to stop the police from destroying its products in the on-going crackdown on illicit liquor on Friday 17 July, 2015.
BY SAM ALFAN.
Keroche Industries got a reprieve after the high court issued orders directing the police remove all padlocks within twenty four hours all the padlocks they placed at the company’s premises.
Justice George Odunga, said that from the evidence presented to the by the company, the police acted beyond their mandate.
He said that there is no evidence that have been shown to the court that the company was manufacturing bad drinks.
The judge said instead the police were destroying evidence, saying that its only licensed officers who can be allowed to carry out the inspection at the company’s premises.
The court directed that the case be mentioned with other petitioners of similar nature on July 21 for purposes of consolidation.
Keroche Industries one of the largest beer manufacturer and supplier termed the attempt and seizure of its products by the police, local MP and hired youths has unlawful and unconstitutional.
Senior counsel Paul Muite told the court the move that took place was within the stipulated laws governing the inspection of products manufactured by the company.
The lawyer told Justice George Odunga, that the Kenya Bureau of Standard has failed its mandate ti inspect legitimate and licensed beer manufacturer and left the same to the national and county government to carry out their duty.
“KBS are the one charged with responsibility to regulate drinks that enter the market and no other individual or organization has that mandate” he said.
Muite told the court that Keroche Industries is not opposed to inspection of its products, but the same should be done within applicable laws and order.
KBS has always carried out inspection of the company’s products and even it has officers stationed at Naivasha country. Saying the action by the police seeking to seize and close the factory did fall within armpit of the law.
“You can’t violate the law in the manner it was witnessed last week at the factory by so doing one will be inviting anarchy” he submitted
The government collects huge tax from the company and no single day it has been reported that products produced have been found to be unfit for human consumption, he said.
Blanked closer of the business is unlawful since no evidence has been shown to the court that the company supplies bad drinks to the members of the public.
The lawyer told the court the police have acted beyond their mandate by confiscating and destroying the beer manufacture’s brands.
He said that the directive issued by the government to eliminate illicit drinks has been subjected to abuse and destruction of private properties.
Muite submitted that the CS Interior has by the Alcoholic Drinks Control Regulations 2015 prohibited the production of illicit alcoholic drinks and alcoholic beverages also known as second or third generation alcoholic beverages, saying Keroche Industries does not manufacture illicit brews.
The lawyer told the judge that the regulations did not define the targeted products and further did not describe what constitutes second or third generation’s alcoholic drinks and beverages or criteria for identifying the said illicit brews
Consequently the ambiguous regulations, Keroche’s licensed and certified products have been and continue to be unlawfully impounded and destroyed by the police.
“CS Interior did not define and provide criteria for identifying what constituted second or third generation alcoholic drinks.” he told the court
Keroche has invested heavily in its business in Kenya, including constructing a brewery, marketing and supply of products across the region, besides creating employment its activities should be subjected to destruction.
Keroche Industries is engaged in the manufacturing and sale of branded alcoholic beverages, including beer, spirits and adult non-alcoholic drinks in Kenya.
The CS’s alcoholic drinks control regulations 2015 contain a blanket ban of “certain ready to drink alcoholic drinks and beverages” without specifying the targeted brands.
The stakeholders in the alcoholic drinks industry were not consulted and neither was there public participation before the regulations were issued contrary to article 10 of the constitution
The courts will its ruling as to whether to uses interim measure against the government over the attack on the factory and attempt to seize its products.