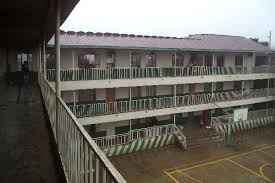 Stephjoy Boys High School storey dormitory that was set ablaze on Sunday night.
BY SAM ALFAN.
Three Stephjoy students arrested over fire at the institution will have to spend the weekend at Tigoni Police station after the application to detain them was adjourned to Monday August 10.
The Prosecution wanted to make an application to detain them for 14 days for them to conclude investigations but the Deputy Registrar Rose Otieno directed that the application be made on Monday before the duty Judge.
The three were represented by their Lawyers Erick Kinyua Maina and Robert Githuri.
The two advocates made an application for the three form two students to be remanded at a Children Remand Institution.
Kinyua told the court that the three students have been in police custody for a week which was infringing on their rights since they were confined with adults.
He said the three had been confirmed to be under the age of 18 and thus should be reminded at a children’s institution waiting to be charged.
Senior Assistant Director of Public Prosecution, Alloys Kemo however opposed the application stating that Tigoni Police station has a juvenile cell that was meant for juveniles and the three have not been mixed with adults.
He urged the court to allow the police to continue holding them in that station for them to conduct proper investigation.
Deputy Registrar Rose Otieno stated that since the Judges are currently attending a workshop, the three to be held in a separate cell at Tigoni Police station since the investigations are carried out in police stations.
She directed the case to be mentioned before the honorable duty Judge on Monday for direction and orders.
The three students are to face murder charges on the incidence.Ten students have so far been arrested in connection with the fire.
The Director of Criminal Investigations Ndegwa Muhoro, who visited the school, said the students in police custody are assisting with investigations.
Muhoro further noted that poor planning was partly to blame for the fire saying contractors did not follow set regulations when constructing the dormitories.
“There was poor planning in the construction of the school dormitories. The set regulations were not adhered to during the construction work,” he said.
Muhoro said action will be taken against any person found to have started the fire.
The Director of Secondary and Tertiary education in the Ministry of Education Robert Masese said that investigations have been launched to establish the cause of the fire.
Masese said he met with stakeholders in the education sector last week to address the unrest in schools, especially in second term, and devise ways of dealing with the mater.
On his part, area MCA Nelson Munga said the will table a motion in the County Assembly of Kiambu to investigate the cause of the fire and bring to book those who approved the school plans.
He said that most dormitories in the county do not meet set standards thus posing safety concerns especially in times of fire.